Here it is, December 30th.  Not even NYE but Pottery Barn is thinking spring.  I don't really mind though, as I have been anticipating Spring 2012 for about 3 months!

My daughter did a shoot for PBK back in September, or was it August?  We were told it would be in the Spring 2012 catalogue ... and it is out TODAY!


So, for all of those who wonder what a shoot is like let me give you the "inside" scoop of this shot.  (This may also appease anyone who is critical of moms who have their kids model)

The set:  This was a house in San Francisco.  A house that a family lives in, but no, this was not the bedroom.  This was the living room (I think!) For the shoot, the furniture was moved out, walls seen repainted with a BEAUTIFUL stenciling.  The lighting is hung from a separate frame.  Viola!  You have a little girl's bedroom!

The shoot:  We arrived and V played while all of the final touches were put into place.  She turned on the shy mode which made me a little nervous.  They gave her the outfit & pulled her hair back (that was the extent of wardrobe / hair / makeup!).  Upstairs we went.  The room was set with the jewelry box filled with costume jewels.  The crew showed V the box & told her she could play with them, try them on.  The pictures started.  She was in little girl heaven!  She was moved in a few different spots, different shots.  The studio teacher & photographer joked with her told her NOT to smile & got some genuine laughs out of her.  After about 45 minutes ... we were done & went home.

V saw the picture today and asked, "Mom, can I go back to that house?  I want to play there again!" 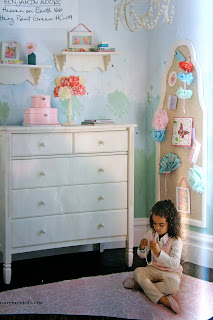 Just got the catalogue!  Vivienne is on TWO pages.  So fun.
Posted by Laura Magu at 9:40 PM 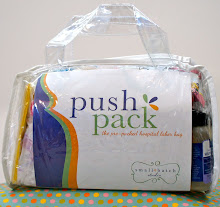 My go to parenting book

Click on the picture to go to Amazon & get yours today (well, tomorrow ...)